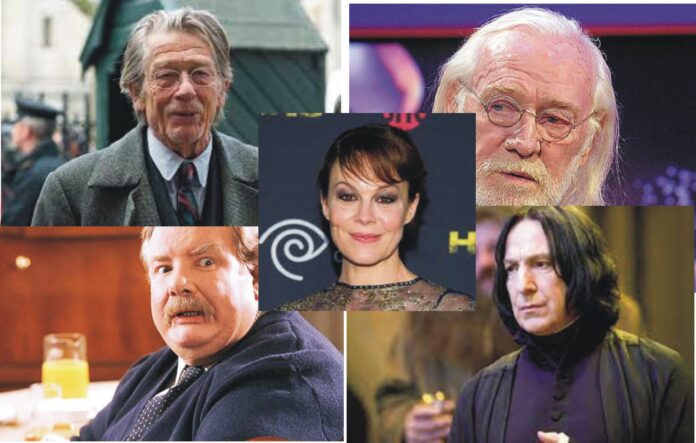 Harry Potter was the best and still the best read novel worldwide even after the making of the movie. The book which was written by British author, Joanne Rowling, (J.K Rowlings) talks about a young wizard, Harry Potter, played by Daniel Radcliffe and his friends Hermione Granger played by Emma Watson and Ron Weasley played by Rupert Grint who were all students of a wizard school.

Harry Potter according to Wikipedia sold over 500million copies as at Febuary 2018 which made it the best selling book in history.

Many of us were young and some were not born when Harry Potter first can to light. It was a movie watched by many up ontill this present generation, Harry Potter was loved and exciting to watch and still is. Recall the book/movie, Harry Potter celebrated it’s 20th anniversary in a film documentary were all cast, producers and directors talked about their expirence during the making of the movie.

In no particular order, below are the photos of the above five mentioned cast and the cause of their death.

Richard Harris was an actor and singer. He played the role of Professor Albus Dumbledore in the award winning Harry Potter.

Richard Harris was born on 1 October 1930, and he died on 25 October 2002, at the age of 72 after being diagnosed with Hodgkin’s disease in August 2002. He died at the University College Hospital in Bloomsbury, in London

Alan Rickman was an English actor. He played the role of Professor Severus Snape in the award winning Harry Potter.

John Hurt was an English actor. He played the role of Garrick Ollivander in the award winning Harry Potter.

John Hurt was born on 22 January, 1940 and he died three days after his birthday at his home on 25 January 2017 at the age of 77. He was said to have died after being diagnosed with early-stage pancreatic cancer.

Richard Griffiths was an English actor. He played the role of Vernon Dursley in the award winning Harry Potter.

Richard Griffiths was born on 31 July 1947 and he died on 28 March 2013 at the age of 65 at following complications after a heart surgery.

Helen McCrory is an English actress. She played the role of Narcissa Malfoy, wife of Lucius Malfoy in the award winning Harry Potter.

These are the lovely actors and actress that casted in the award winning Harry Potter and it is so unfortunate that they are no longer alive to have witness the celebration of the movies’s 20th annivarsary. They will all be missed.

More cast to come from the Harry Potter series who are no longer in the land of the living. Stay intouch for the next cast from Harry Potter by subcribing to our newsletter for instant notification for new update.