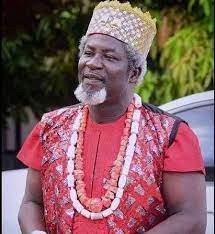 The actor died in the early hours of Thursday morning after battling a strange illness.

Sam Obiago was said to have been ill for some time now and that he was rushed to the hospital on Wednesday into Thursday night after the illness worsened.

Subsequently, he died this morning.

The news of his death was made known by his colleagues on social media as they expressed their shock.

Before his death, Sam Obiago was a film maker, TV personality and movie producer who has featured in over 100 Nollywood movies like Gifted, Tears Of A King, Woman Of Fire, Ghana Island, Royal Turning Point, Royal Appointment, Bargain, Combined Forces, Altar Of Love, Wishes, Ancient Love, Drunk Princess, The Missing Blood, Obed And Ruth, The Visitor, Osinachi, One Night Stand, Throne Of Fire, Ancient Key, Wicked Tradition, Tortured Heart, Royal Wreck, The King’s Decision, Blood Brothers, The Orbit, Strength Of Womanhood, Battle Of Kings, Royal Headache, Another Life, Game Of War, Jacob’s House, My Decision, Village Runs, Magic Dragon, The Love of Father and Daughter, A Poison to the Heart and Grievous Oath, among others.

ABOUT US
We aim to distribute accurate and transparent news content, blogging and webmaster tips to readers around the world.
Contact us: [email protected]
FOLLOW US
© 2022 HGS Media Plus_All Right Reserved
We use cookies on our website to give you the most relevant experience by remembering your preferences and repeat visits. By clicking “Accept All”, you consent to the use of ALL the cookies. However, you may visit "Cookie Settings" to provide a controlled consent.
Cookie SettingsAccept All
Manage consent